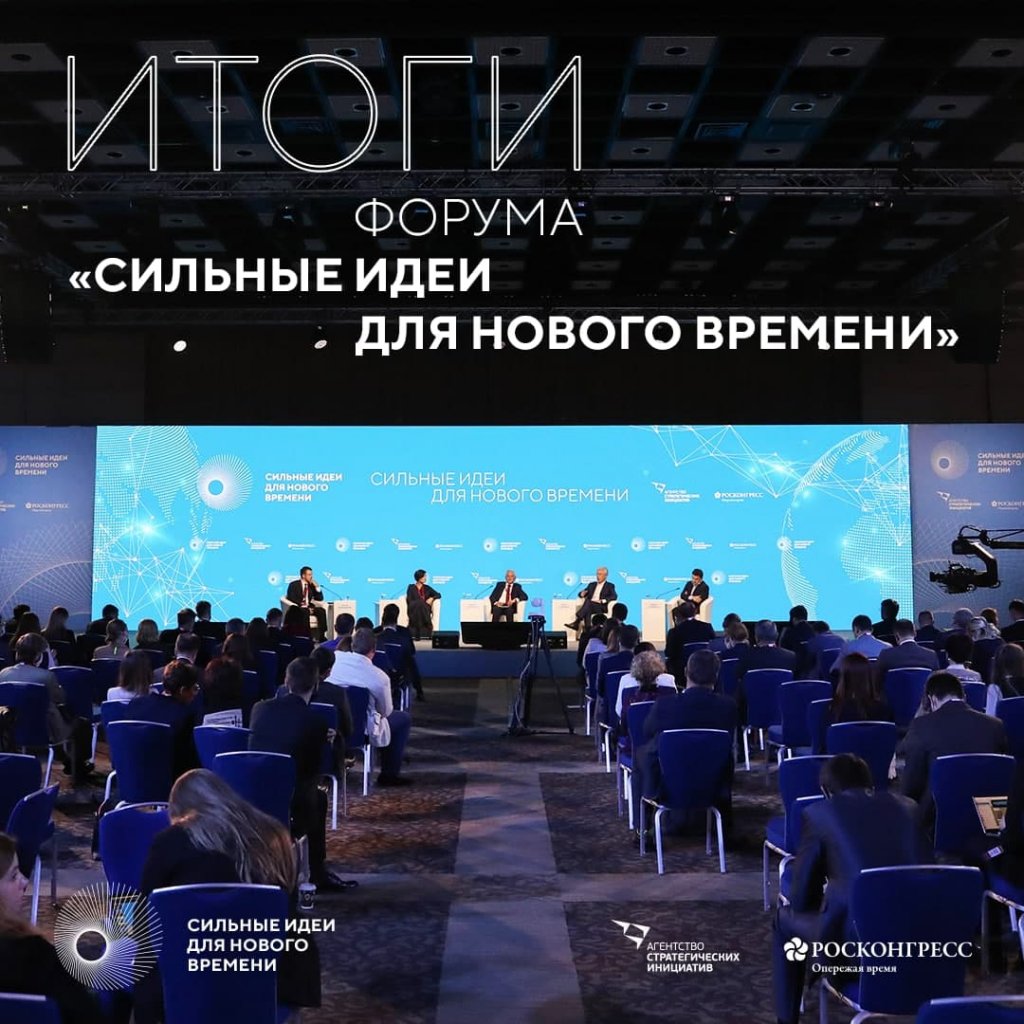 Powerful Ideas for New Times Forum organized by the Agency for Strategic Initiatives (ASI) and the Roscongress Foundation was held in Moscow with the participation of the President of the Russian Federation Vladimir Putin. Out of 15 000 proposals submitted to the crowdsourcing platform idea.asi.ru, 300 ideas made it to the final of the Forum, some of them were presented by their authors personally to Vladimir Putin. The forum allowed to form a community of initiative people and collect the most promising ideas that will help reboot the economy, social and technological spheres of the country. It was decided to hold the Forum annually.

Powerful Ideas for New Times Forum was held in a mixed online and offline format. More than 300 Russian and foreign speakers - moderators, speakers and experts - spoke to the participants. Among them there are representatives of the Presidential Administration of the Russian Federation, members of the Federation Council, the State Duma and the Government of the Russian Federation, heads of regions, heads of the country's largest companies, charitable and public foundations, the Russian Orthodox Church and authors of ideas included in the final top-list of 300 most promising ideas.

“I propose to monitor regularly, at each ASI supervisory board, how this model works, how many ideas have received support and have found their practical implementation,” Vladimir Putin said. - "We need every idea, each idea is important, the ideas of young people are extremely important. It is very good that they are already setting the vector, increasing the speed of change, creating so-called new meanings, culture, media and business models, and unique technical solutions. I would like to repeat once again: this is very valuable for us”.

During the plenary session, a number of participants of the crowdsourcing of ideas, which took place on idea.asi.ru platform, were able to personally present their projects to Vladimir Putin. Among them are student Diana Tsygankova with a project to support young people with disabilities, Maxim Usynin with the program of professional re-qualification of citizens "Nasebya.RF", Alexander Morzunov with the initiative to create the All-Russian movement "Search Engines for Schools", Yan Kozhan with a project to create a model of creative clusters using the example of an old Ural plant. In addition, Anastasia Tsvetkova took part in the presentation of ideas, proposing a program for the sustainable management of municipal solid waste in specially protected natural areas; Albina Gazizullina, who presented a new approach to the reform of control and supervisory activities in the project "Approved Business", Ilya Ovodov with a digital solution for training people with visual impairments "Braille Recognition", and Alexander Pinsky with a project for the widespread operation of autonomous sea vessels of the commercial fleet. The youngest participant in the meeting with the President of the Russian Federation was an eighth-grader from Anapa, Maxim Volkov. A 14-year-old student suggested creating a platform to support young entrepreneurs.

Due to the high social significance and great potential for the implementation, instead of 100, 300 ideas were selected in the top list that could ensure the sustainable development of Russia in the new economic conditions. All 300 authors of ideas will have the opportunity to present them within pitch sessions: from November 2020 to February 2021, a series of presentations will be organized with the involvement of representatives of federal authorities, development institutions, banks and companies, as well as specialized experts. This will give the authors of the ideas an opportunity to gather attention at the highest national level and gain support.

The organizers of the Forum also stated that the projects that were not included in the final top-list will not be ignored. Authors of all ideas, without exception, can count on support from ASI, the Roscongress Foundation and partners of the Forum. In addition, many of the proposals were submitted to the regional level and reviewed by representatives of management teams, and 789 ideas have already received support.

“The search for ideas is now one of the main trends not only in Russia, but also in world economy, and the forum of strong ideas appeared right on time as a response to the current challenges. This is an unprecedented opportunity to change the country at the initiative of citizens, to listen to each voice, to analyze the viability of initiatives and to immediately bring about changes in life. I am sure that the ideas presented at the Forum will initiate completely new processes in the economy and accelerate the innovative development of regions and our entire country,” said Anton Kobyakov, Advisor to the President of the Russian Federation, Executive Secretary of the Organizing Committee of Powerful Ideas for New Times Forum.

First Deputy Prime Minister of the Russian Federation, Chairman of the Forum Organizing Committee Andrey Belousov noted that "now we are talking about building a strategy in conditions of very high uncertainty." “We have 4 main priorities in the economy for next year. The first one is private investments. The second priority is export support. The third one is the development of small business. The fourth is the deployment of infrastructure projects that we are implementing in many regions of the country. These are the projects that will create new growth centers for decades to come,” said the First Deputy Prime Minister of the Russian Federation.

ASI General Director Svetlana Chupsheva noted that the Forum formed a model for work with communities and leaders from all over the country and suggested holding it on an annual basis. “The Forum is just the beginning. We really want this practice to continue. We have agreed with Roscongress that the Forum will be held annually. And every year we will show the results of ideas and projects that have been implemented jointly with the regions, with business, etc.,” Svetlana Chupsheva emphasized.

“On the site of Powerful Ideas for New Times Forum we implemented a mixed format of events – we organized broadcasts of all sessions of the business program, a number of online signings with representatives of Russian regions and international partners. In two days of the business program, the forum sessions received 75,000 views, the broadcasts were watched by over 20,000 unique users,” Alexander Stuglev, the Chairman of the Board and Director of the Roscongress Foundation, said.

More than 15 agreements were signed at the Forum site, including with respect to the development of industrial tourism, the youth agenda, as well as agreements on the establishment of partnerships and the development of long-term and effective cooperation. In particular, ASI will develop cooperation with the administrations of the Sverdlovsk, Ulyanovsk and Chelyabinsk regions, as well as the Khanty-Mansi Autonomous Area, the leadership of the Ministry of Education of the Russian Federation, the Russian Post, the Agency for the Development of Human Capital in the Far East and the Arctic.

In addition, the Forum announced the creation of an Interdepartmental Working Group under the Government of the Russian Federation and the Presidential Administration for the development of creative industries. First Deputy Chief of Staff of the Presidential Executive Office Sergei Kiriyenko stressed the importance of joint actions of the Agency for Strategic Initiatives, authorities and society to achieve goals in this direction: “Creation of creative industries is becoming the most important competitive advantage of each country. State support in this process will certainly be required. But planning a program for the development of creative industries in the depth of some department will not work. This requires joint cooperation."