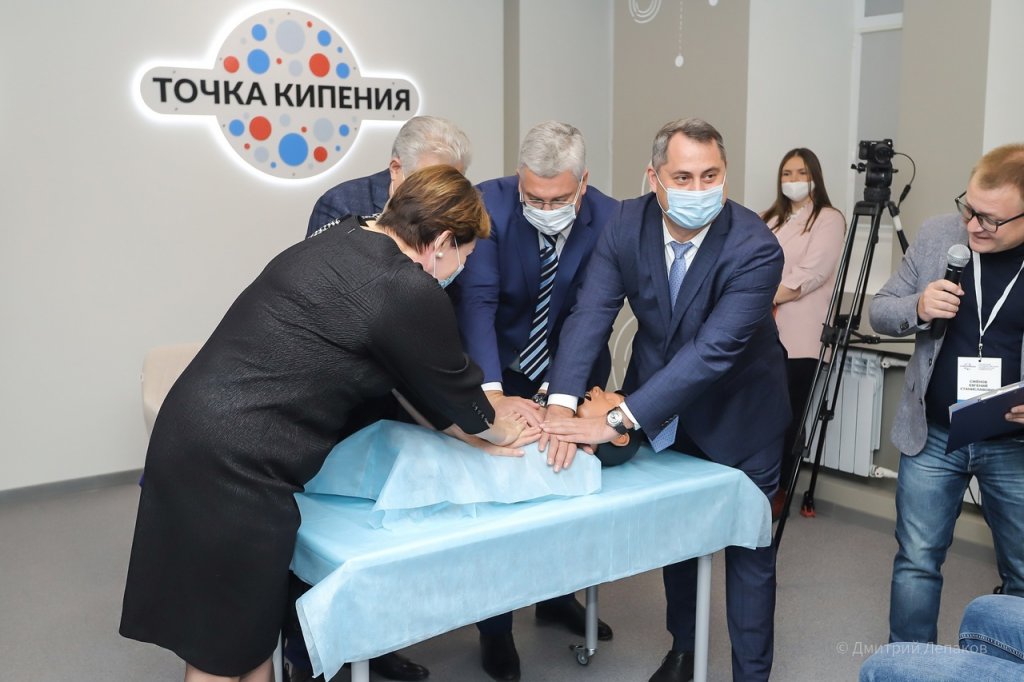 The first Russian medical Boiling Point co-working space was opened at Samara Medical University (SamSMU of the Ministry of Health of Russia) with the support of ASI. The Boiling Point’s core activities will be the training of future healthcare managers, teams of innovators, leaders of changes within the university, implementation of projects of the NTI Healthnet, Neuronet and Technet markets.

“Today, the overall focus is shifting towards the digitalization of medicine and personal medical assistants,” mentioned Dmitry Peskov (Head Young Professionals Direction, ASI, Special Representative of the President of Russia on Digital and Technological Development). “It seems to me that now is the right time to focus on bringing final products to the market and increasing the number of startups. Therefore, I wish the whole team to turn a new Boiling Point into a space of technological entrepreneurship, so that it becomes a place of cooperation with major players and improving the quality of life of our people with the help of new technological solutions in medicine.”

During the Boiling Point opening ceremony, SamSMU and the NTI Platform signed a cooperation agreement. The new platform will bring together young doctors, scientists, members of the NTI Circle Movement, students, representatives of business communities, technology entrepreneurs, medical volunteers and other public organizations.

“The opening of the country’s first medical Boiling Point will be an important milestone for communication between students, schoolchildren, industrial partners and the development of new ideas and breakthrough solutions that will contribute to the development of high-tech medicine, the search for ways to treat and prevent the most complex diseases, which in the future will save many lives of our fellow citizens,” said Viktor Kudryashov (First Vice-Governor – Chairman of the Government of the Samara Region) – “I am sure that in a few years this project will develop into something more ambitious, will inspire young people to scientific research, and more and more children will join this movement to form the core of our medicine.”

The SamSMU Boiling Point is going to become a sandbox of new educational formats for talent management in the development of the Information Technology in Healthcare high-tech sector of the economy, and will also enable the implementation of youth projects under the Priority 2030 strategic academic leadership program.

Furthermore, the Point will help to accelerate the digital transformation agenda in the region, the launch of breakthrough projects for the development of the Samara Region. The model of the first medical Boiling Point is going to be transmitted to other medical universities.

According to Overall Ranking, an annual global ranking of impact by universities, SamSMU took the 28th position among Russian universities. According to RAEX, SamSMU ranked 50th among 100 best universities in Russia. Six educational programs of the university are recognized as The Best Educational Programs of Innovative Russia. Every year, over 7,000 students, residents and postgraduates study at the university, and over 13,000 specialists improve their qualifications. SamSMU trains personnel for practical healthcare in 32 regions and 15 countries of the world.

The network of Boiling Points today includes more than 130 sites in 80 cities and 65 regions, as well as the international Boiling Point in Alma-Ata.