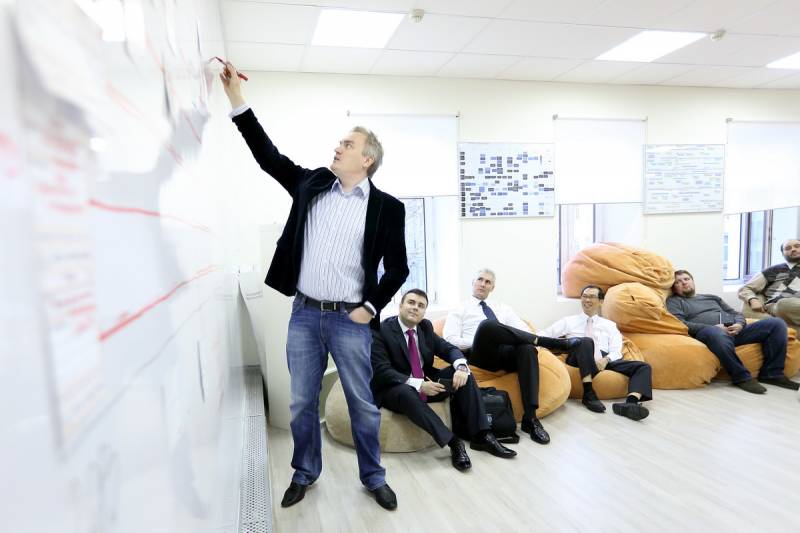 The agenda of the Board of Directors was to discuss an action plan for the next year, WorldSkills brand and communications development strategy, interaction of the Movement with international organizations, the programme of the General Assembly for the year 2014.

During of the Board of Directors there was held foresight session devoted to the future of vocational education and future workers. The goal is to develop the future inter-professional work competence, identify the trends, which will have to be taken into account in the development strategy of the WorldSkills movement, identify the main vectors of development competitions. This session will continue the project of the Agency for Strategic Initiatives and LNA "Skolkovo" , "A Fore-sight of Competences", bringing it to the global level.

The foresight session was attended by the representatives of the WSI Board of Directors, the organizers of the movement in Russia, the Agency's team of "Young Professionals" Direction and global industrial partners WorldSkills. During the foresight session and the Board of Directors the President of WorldSkills International Simon Bartley outlined the key tasks of the movement in this way: To date, the WorldSkills International helps participating countries to organize and conduct national and international competitions of working professions. During these competitions, participating countries can compare, at what level of development are their professional standards, can show case their skills and understand how things are going with it in other countries. This means that they can match the level of competences and international standards, and then bring these results home to value the level of competence in their own countries and compare the performance of labour with other participants.

To this end, we are moving in three general directions: First, we tell children about what professions generally exist, and what career growth is possible in these occupations. Second, countries-participants can compare their standards with the best professional practices to get a vision on what level of development their country is. Third, we transmit to all Member countries of the movement the best educational programs and practices developed by WorldSkills International experts.

Our main activity is as well the interaction with the Governments of the participating countries to show how you can combine academic and vocational education. In order for a country to develop itself, a vocational training is also imperative. What we do, we believe is right because we give the opportunity to young people to self-actualize through professional activities. Thus, we develop the economy too, as the country's success in the global market depends largely on how well developed its professional workforce is.

Today we are in Moscow, as here take place the Finals of the WorldSkills Championship of Moscow. One of the important goals of our visit is to help the WorldSkills Russia movement and to promote the spread of WorldSkills in other regions of Russia.

The Future of WorldSkills and working professions In the period of two days we have received a good response to these questions: we built a roadmap that we will handle to the Board of Directors of WorldSkills International, we have formulated a WorldSkills mission aspects, which are important for the future, for example, WorldSkills becomes more and more a career exchange.

That is, if before the WorldSkills mission was in promotion of standards, then it was ensuring comparability of these standards, now it is becoming a global career exchange, not only the world's, but a country's inner, which promotes the most talented people, presents them to the employers. There is another story that we saw through the foresight, and it is the revival of handicraft, in the next few years this will become very important precisely because people will start to think about themselves and their place in the work. We also saw several important trends:

We also discussed how to return actually the meaningful role of professional workers, as in the structure of employment these workers now are most in demand.

The examples include Brazil or Taiwan, where now people prefer to receive vocational education, because it provides more guaranteed employment and university education does not guarantee employment.

One of the biggest problems in this case is the parents, whose consciousness is not ready for this, and as a part of our session, we discussed that we need to deal particularly with parents’ education, raise their awareness that working profession is a very good perspective today.

The Future of WorldSkills Russia

We questioned several members of the WSI Board of Directors a question about how they see the future of WorldSkills Russia. Here is responses we received:

"I have strong confidence that Russia can become a model of professional education for all countries if it can pay more attention to the internal content of training programmes, since the process of teaching in colleges and universities, as far as I know, is at a high level. Besides, in Russia the level of education of the workforce is high not only in service and in industry, but in all other spheres of life, including in the area of public administration. A Russian participant at WorldSkills competition has the ability to get the best world experience that it can replicate throughout the country. Then, the best experts will appear in Russia capable of winning world competitions. And you can do it in a very short time!"

"I believe that Russia has a great future with WorldSkills, as the Organization management has a wonderful ability to seize every opportunity for the development of the Championship in the country. Russia also has the ability to use that vast experience, which has been accumulated by WorldSkills movement throughout its almost sixty-year history. Other countries have gone a long way to understand what works and what doesn't, while Russia has a chance to immediately adopt best practices and to start implementing them without any delay and use."

"The future of WorldSkills Russia looks clear, because the organization is in very good hands. I am also pleased to note that the development of this movement in Russia is contributed by the Agency for Strategic Initiatives, which has a vision and deep understanding of WorldSkills’ mission and which can unite the efforts of private and public sectors, as well as educational institutions, which is essential for WorldSkills national operator".