SIBUR pegs the inmates of Tomsk Quantorium as future engineers for its businesses in the region. 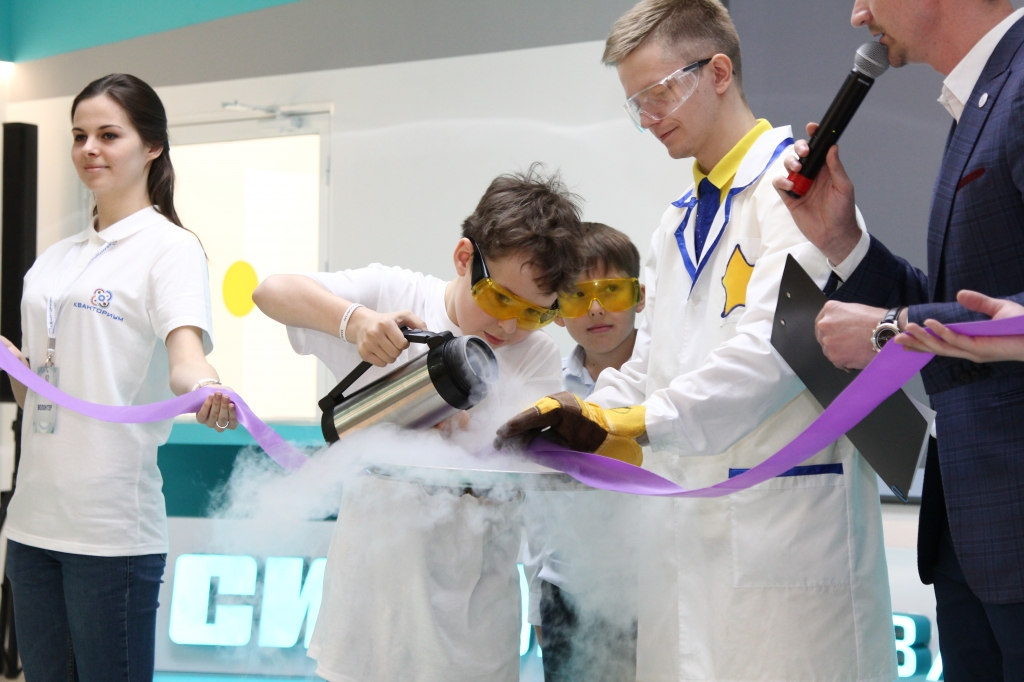 On May 19, in the framework of the IV Forum of Young Scholars U-NOVUS, a new site for Children’s Technological Park Kvantorium was inaugurated in Tomsk.

The Tomsk region became one of the regions that in 2016 received a subsidy from the Ministry of Education and Science of Russia for the opening of the children’s technological park in the framework of the State program “Development of Education”. Each year, in Kvantorium, 1000 young people in the region will study technologies and implement their own engineering projects in 8 educational programs: “Bioquantum” (Biotechnology and Human physiology), “Robokvantum” (robotics), “Geokvantum” (Geoinformation Technologies), “IT-kvantum” (Information Technologies), “Aerokvantum” (unmanned aerial vehicles), “Kosmokvantum” (space), “VR/AR” (virtual and augmented reality), “Industrial design”. The technopark is equipped with high-tech equipment that enables schoolchildren not only to learn modern technology but also to develop and release finished engineering products, and to solve real production tasks at the request of enterprises.

Andrey Belov, director of Personnel management of the Tomsk site of SIBUR, noted that “the training of engineers must start from the school bench, because the opportunities that we now provide to schoolchildren will largely determine their professional activities tomorrow”.

I’m sure that a part of Kvantorium graduates in the future will become successful technologists and managers of SIBUR - Andrey Belov.

The best of the young engineers will be part of the employee pool for further work in the region’s high-tech enterprises. For Tomsk region, one of the oldest educational, scientific and technological centers in Siberia, the creation of a training base for future engineers is essential to maintain and increase its positions as an advanced innovative region.

At the opening of Kvantorium the head of Tomsk Region, Sergey Zhvachkin noted that today will make it into history of both Siberia and Russia. “We are opening a children’s technology park on the city’s main prospectus, at Tomsk University mile,” underlined Sergey Zhvachkin. “Our universities are successfully developing space, robotics, information and many other technologies. And here in modern labs and a comfortable environment, we will be preparing replacement for our students and scientists.” As the Deputy Prime Minister of Russia, Arkady Dvorkovich, noted at the opening ceremony, “It is important that an interdisciplinary approach in Kvantoriums allows for the application of different technologies, combining information, bio-, robotics elements, using the latest achievements in each of these areas”.

“Boys and girls are on the front line, they know what’s going on in science and technology right now. Tomsk Kvantorium is a story of success, and from here a generation of wonderful professionals will come out,” said Arkady Dvorkovich.

According to Marina Rakova, General Director of the federal operator of the children’s technoparks network Kvantorium in Russia, the implementation of science and technology projects by children, and the acquisition of new skills in modern technological fields is an important but not the ultimate task of Kvantorium. The ideologue of the project, Marina Rakova, believes that, ideally, every pupil should become a universal “solver”, and be able to find a perfect end result for any given task. It is these competences that will be required in an age of great data and rapidly evolving technologies.