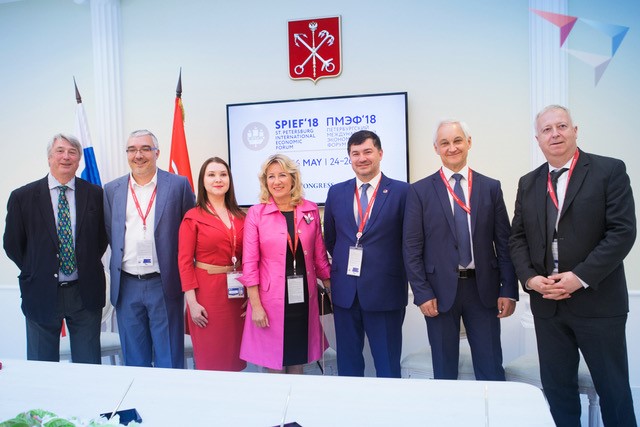 The venue of the European Championship of Professional Excellence (EuroSkills) in 2022 will be the congress and exhibition center EXPOFORUM in St. Petersburg. This was announced by Georgiy Poltavchenko, the Head of the region, at the ceremony of signing the agreement on preparations to EuroSkills-2022 with representatives of the Worldskills Union Russia and WorldSkills Europe, which took place on May 24 at the St. Petersburg International Economic Forum (SPIEF 2018).

‘The signing of the agreement will intensify our preparations to EuroSkills. Expoforum, the place we are standing now, in 2022 will become the site of the championship of working professions, and you have the opportunity to see in what conditions this will take place,’ said Georgiy Poltavchenko, appealing to the representatives of WorldSkills Europe.

Dita Traidas noted the support of Euroskills by the Russian government, the authorities of St. Petersburg and the WorldSkills Russia movement. ‘This kind of a triangle of support in Russia inspires us giving confidence that the championship will be held at the highest level,’ said Dita Traidas. – ‘We also see support from employers, which encourages young people to master working specialties. I hope that Russian youth will be able to use this event as a long-term factor to develop their skills and applied knowledge.’

Andrey Belousov emphasized that for Russia WorldSkills it is much more than a competition system. ‘This is both popularization of working professions among young people, and promotion of the most advanced professional competencies, as well as restructuring of the vocational education system. Within several years, a powerful WorldSkills movement has been created in Russia, which relies on organizational infrastructure and support at all levels, both on the part of companies and on the part of the authorities,’ said the Assistant to President of Russia.

St. Petersburg will host the eighth European Championship of Professional Excellence in 2022, and Austria will hand over the baton of the championship to Russia as the host of EuroSkills in 2020. The candidacy of the Northern capital was unanimously approved on March 7 in Budapest by representatives of 28 WorldSkills Europe member countries at the annual general assembly of the European organization. The Chairman of the General Meeting of the Union ‘Young Professionals (Worldskills Russia)’ is Dmitriy Peskov, the Director of the ‘Young Professionals’ at ASI.